The 4 Types Of Climbing Ropes: Get The Best Rope For You

Learn what each type of rope is used for and how to identify them to get the best rope for you. 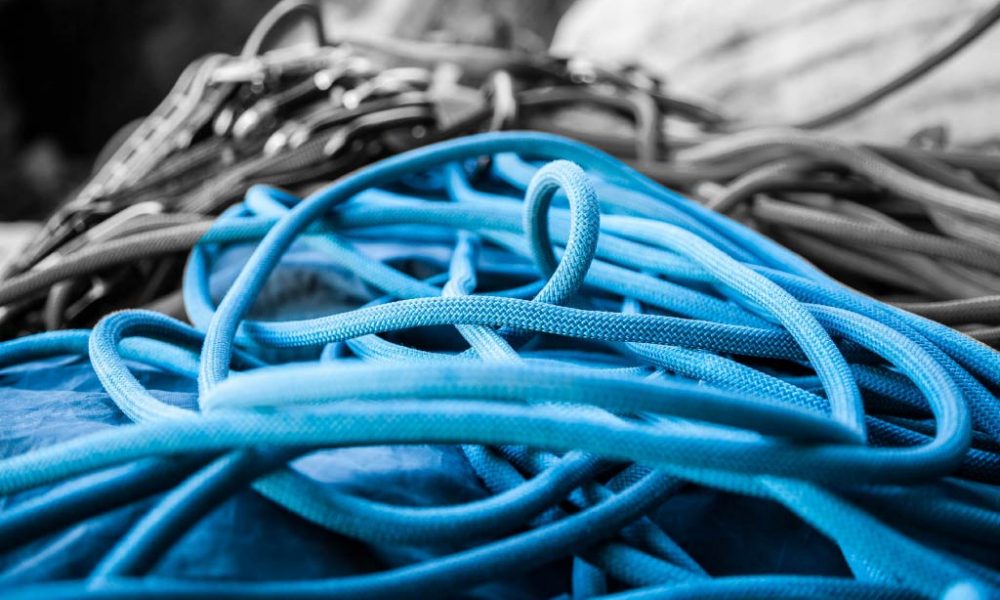 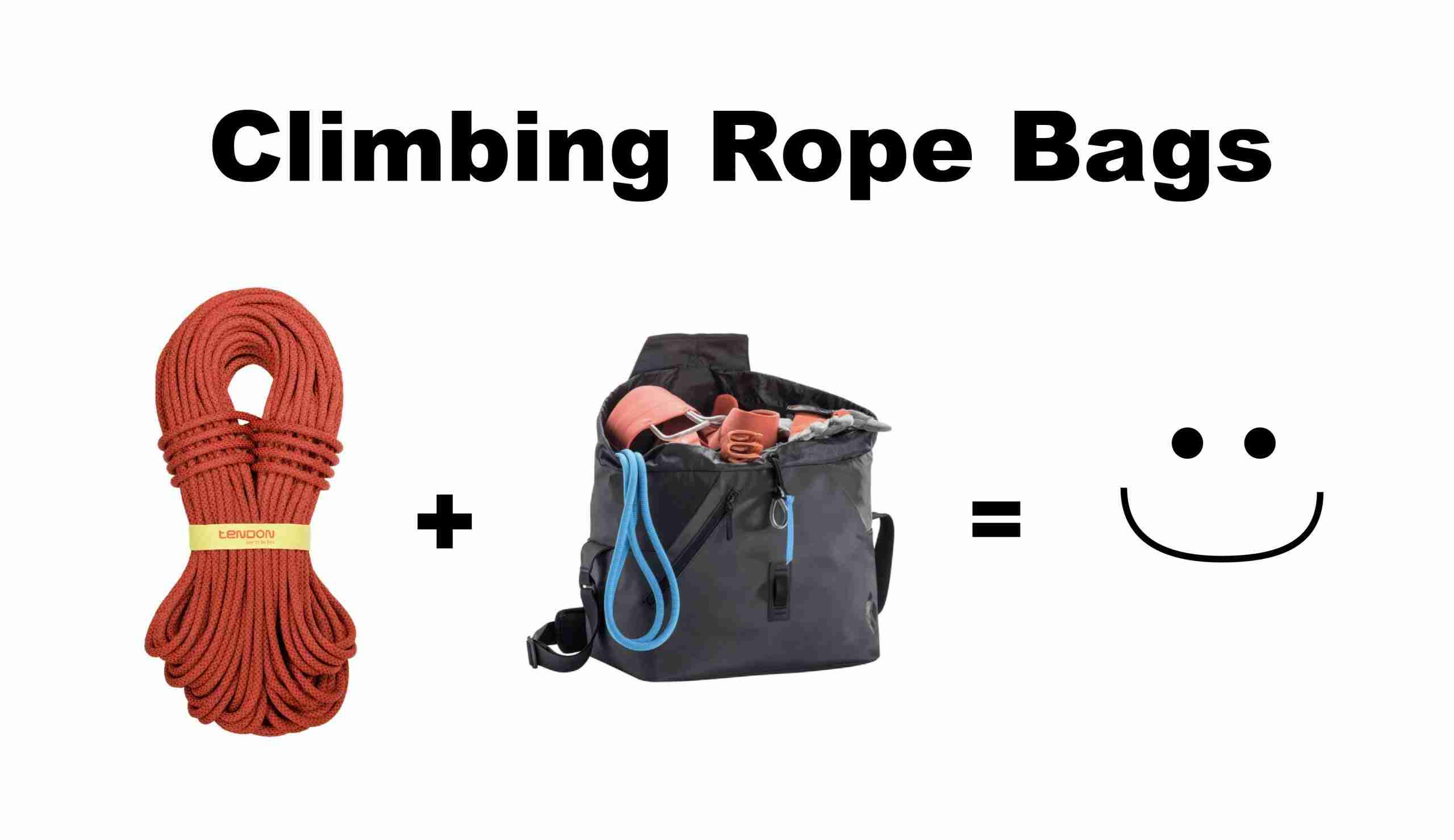 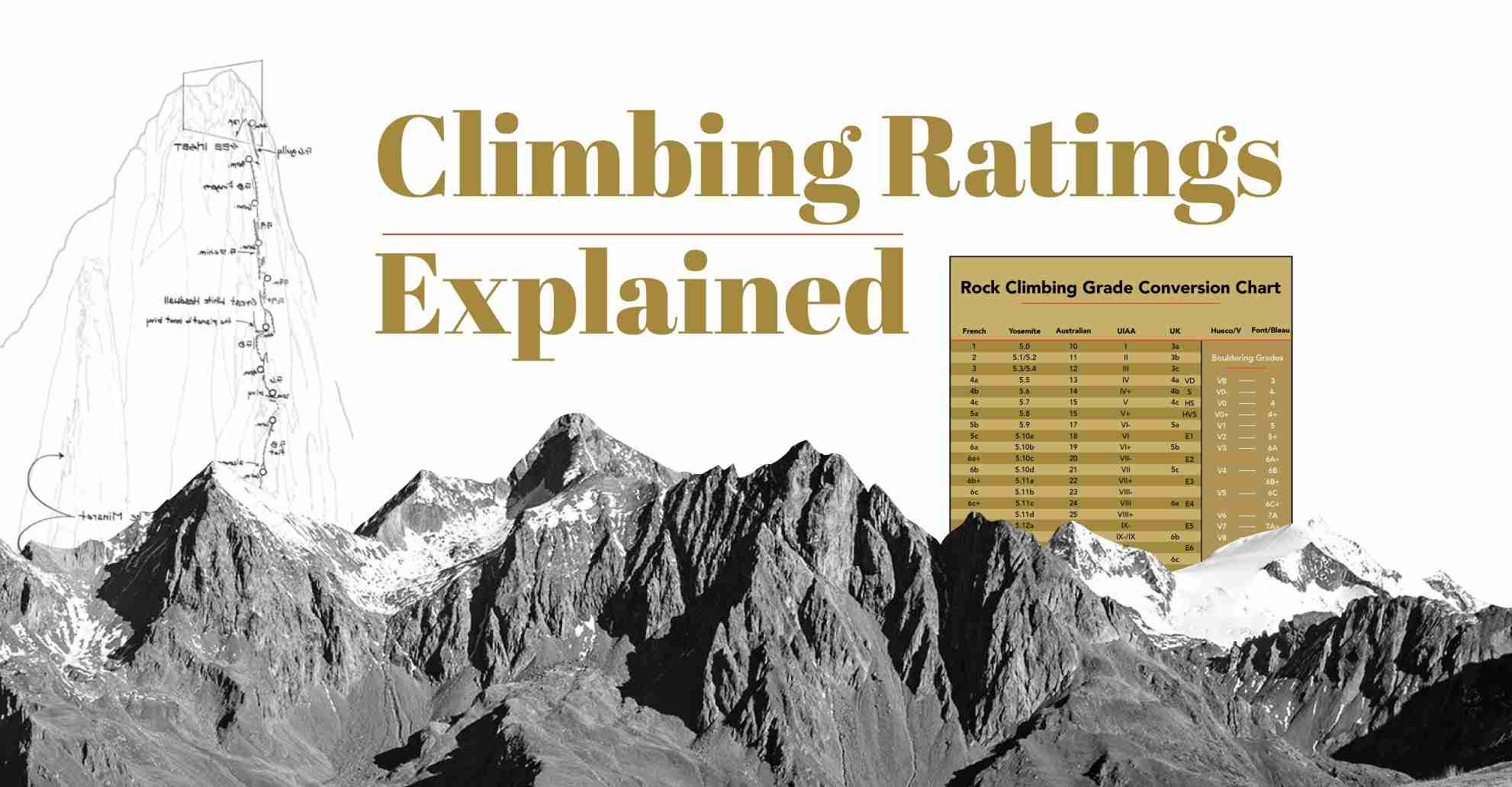 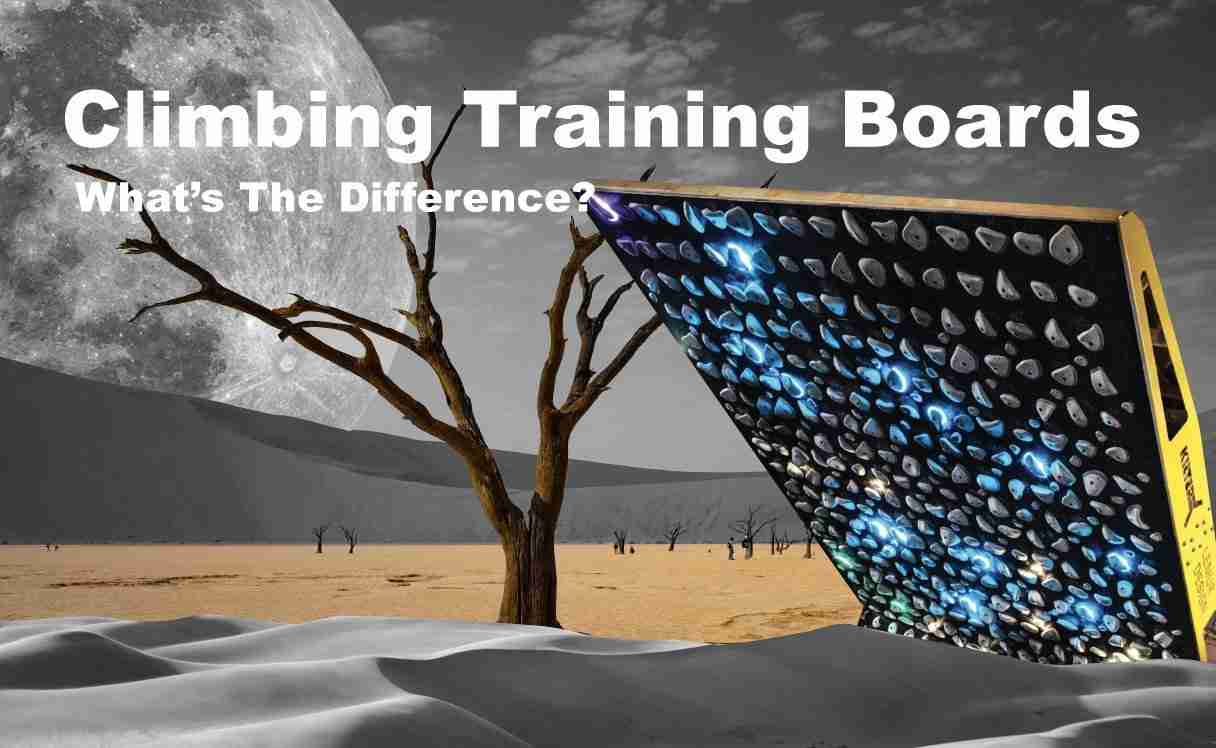 Home » Blog » The 4 Types Of Climbing Ropes: Get The Best Rope For You

Confused about the different types of climbing ropes?

When you start looking for a new rope, the different types of ropes can be a bit overwhelming.

We are going to look in detail at half ropes, twin ropes, double ropes, single ropes, and multi-use ropes below.

For most of us on the sharp end, we generally tie into one-single rope.

Read on to find out exactly what you need to know to find the best climbing rope for you.

Here’s what we are going to look at (click the headings to skip ahead).

Once you’ve decided on the best rope for you, don’t forget to use our deal finder to see if it is on sale at one of the top outdoor retailers.

Simply looking for the best rope in each category?

Here are our top picks based on quality of construction, rope longevity (how long it stays feeling like new), handling, and of course price.

Types of Climbing Ropes & How To Use Them

Other than single ropes, there are a few other types of climbing rope setups that can be useful for lead climbing. Namely, Half Ropes and Twin Ropes.

Type of rope is usually indicated on the rope label on the packaging and a label at each end of a new rope.

As you will see, these two setups are very different and are not to be confused.

To clarify, Half Ropes and Double Ropes are the same things. There is also a grey area; multi-use ropes. These ropes are rated for use as multiple types (more on this later).

Which means, there are actually only 3 types of climbing ropes! Confused yet?

Don’t worry, we are about to clear it all up.

Caveat: This article is about the different types of dynamic climbing ropes and does not include static ropes.

Take a look at this visual to get a quick idea of how the three types of ropes work:

Always check your rope label to ensure you are using it for the intended purpose.

Ropes can be a real cluster f*ck

Choosing a rope can actually be a little more complicated than it looks. There are a lot of ins and outs to consider.

One thing you must be familiar with is the safety rating given to each rope by the UIAA.

Through a series of rigorous tests (check these detailed diagrams from the UIAA) climbing ropes are certified for use as either Single Ropes, Half Ropes, or Twin Ropes.

A rope can be triple or double certified (multi-use), more on this later.

The next time you pick up a rope, look at the tip. There should be a plastic label on each end. This label tells you who made it, the diameter, and what use it is certified for.

In all likelihood, this is the setup at your local climbing gym and the one we are all most familiar with. As the name implies, this is climbing with a single rope.

A Single Rope is a sole rope used while climbing. All gear is clipped to this single rope. 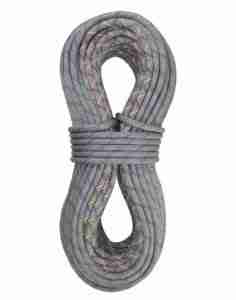 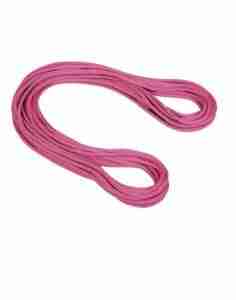 Important: Not all ropes are created equal. Ensure that your rope is rated for Single Rope use. This is indicated at the tip of the rope with a symbol on the label as indicated in the image above and below. Learn more about rope labels here.

Generally, single ropes will have a diameter greater than 9.0 mm.

The diameter you choose will depend on a number of factors.

These include but are not limited to terrain, moisture exposure, type of climbing, length of the route.

With today’s technology, there are also many skinnier ropes rated for single use. These ropes are often triple rated (more on that later) and super high performance.

If you have ever taken a fall on one of these it’s a bit scary hanging there a hundred feet off the deck with a cord the width of a Slim Jim holding you up.

Examples of Multi-Use climbing ropes include: 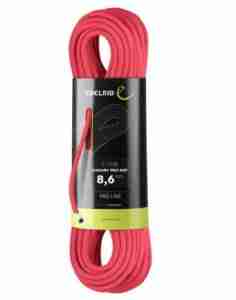 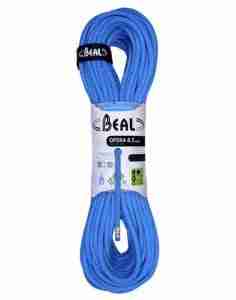 Climbers using a single rope set-up would look something like this:

What Are Single Ropes Used For?

Single ropes can be used for just about any type of climbing from sport to trad to big-wall and everything in between.

While not technically ideal for ice climbing or mountaineering (Half-Ropes are better designed for this) you will still see most people using Single Rope setups in these conditions.

It is completely normal for climbers to use a Single Rope or Half Ropes for a mountain or ice route.

Remember, the only right answer is safety. Make sure you have the appropriate rope for what you are doing.

Half Ropes tend to range from 8-9mm in diameter.

This is the symbol indicating a rope is a certified Half Rope:

Half ropes (also called Double Ropes) can be a little confusing.

An easy way to remember is that half ropes are a set. Two halves make a whole.

When using a Half Rope setup the climber is tied into and belayed on both ropes.

As the climber ascends, they will clip each rope separately into different pieces of gear.

Often this is done in an alternating pattern (every-other-one). Meaning, each piece of gear will only have one rope going through it at a time.

In the video below you can see Hazel Findlay using Half Ropes in her first female ascent redpoint of a super sketchy E9 in England:

When Would You Use Half Ropes?

Half ropes used appropriately reduce the amount of force exerted on a piece of gear in case of a fall.

This is especially important when using ice screws or other marginal—read scary—protection (as seen in the video above).

For wandering routes, Half ropes can greatly reduce drag as well as movement or walking of gear.

Advantages Of Half Ropes

Disadvantages Of Half Ropes

Twin Ropes are two, small diameter ropes that act as one rope.

They are, for the most part, smaller in diameter than Single Ropes or Half Ropes. Usually around 7-8mm.

If you have ever known a pair of twins, they were probably darn near inseparable.

To help remember, twins don’t like to be separated so you always clip them into every piece of gear together.

When Would You Use Twin Ropes?

Being similar to a Single Rope in practice, the differentiating factor in when to use Twin Ropes is in the type of climbing you are doing.

A Single Rope is better for say the Crag while Twin Ropes would be better for a long mountain route with a big approach or mixed routes.

Having two ropes that act as one on the wall allows you to spread the weight between partners on the hike in.

Twin Ropes make a lighter option when every ounce counts.

Additionally, as with Half Ropes, a Twin Rope setup gives you a bit more safety when rope damage is a concern. And, Twin Ropes give you more options in case of emergency or long rappels.

Important: In safety tests, Twin Ropes are fall tested with both ropes weighted together at the same time. Whereas with Half Ropes, each rope is individually weight tested for falls.

This means that a rope rated for Twin only cannot be used as a Single Rope or a Half Rope.

When using Twin Ropes you must always have both ropes clipped through every piece of gear.

Many ropes are now manufactured to meet the standards for multiple classifications.

When used to their specifications these ropes can be used in a number of systems and terrains.

Remember, a big part of why these ropes can be so thin and light is because they basically have less sheath (covering). This means they will be more prone to wear and tear.

Additionally, check the specs on your preferred belay device.

Be aware: Some ropes might be too thin for your device. And, even if they do meet the specifications a thinner rope is generally going to feed through the belay device quicker and make catching falls a bit more difficult.

What is a Single Rope in climbing?

Climbing with a single rope means using one rope to clip through all of the protection in the rock. Single ropes are generally thicker than other ropes, ranging from approximately 9-10mm in diameter.

Certified Single ropes are indicated with a ‘1’ in a circle on the rope-end label. 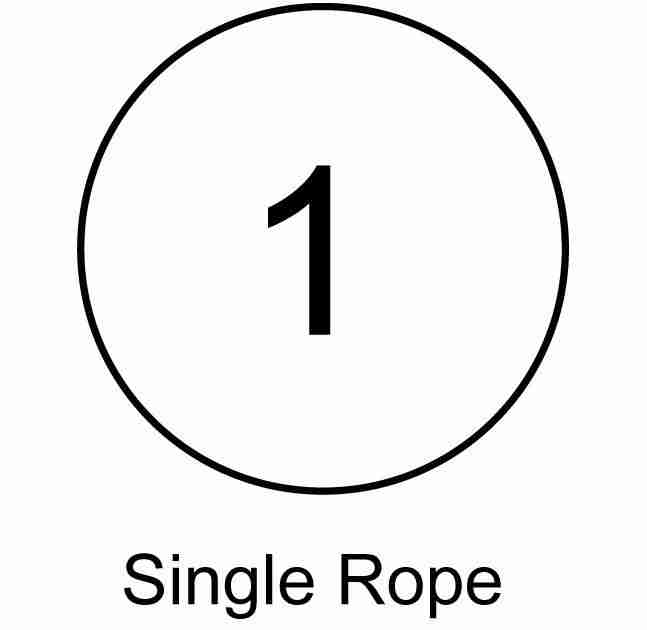 When to use a Single Rope in climbing?

Versatile and durable, Single Ropes can be used in any climbing situation. However, they are less ideal for some types of mountaineering or ice climbing.

What are Half Ropes or Double Ropes in climbing?

Half and Double Ropes are synonymous. These are usually ropes of smaller diameter—approximately 8mm—than Single Ropes.

Climbers tie into both ropes, clipping each rope through alternating pieces of protection in the rock as they ascend. Each rope is individually rated for falls. But, these ropes must be used in a pair for proper use and safety. Two halves make a whole.

Certified Half or Double Ropes are indicated with a ‘1/2’ in a circle on the rope-end label. 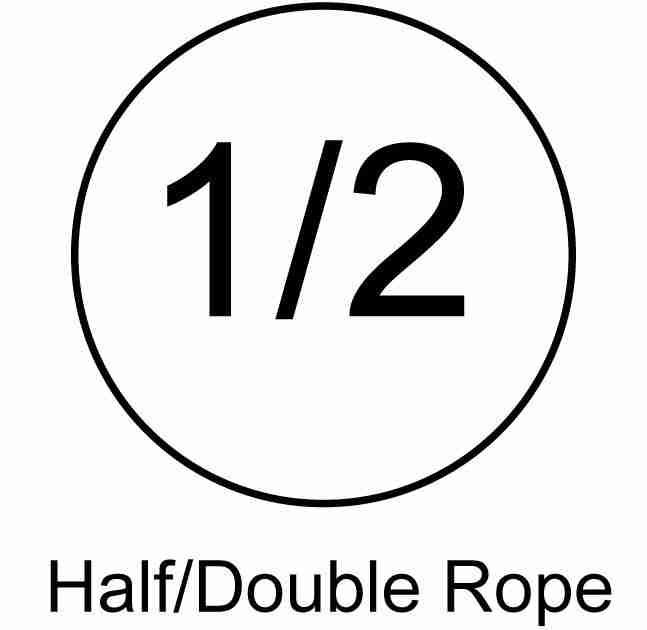 What are Half Ropes or Double Ropes used for?

Half Ropes are ideal for wandering routes with potential for marginal protection and rope damage. These ropes may be useful on routes with long rappels. Examples include wandering or isolated mountain routes, ice climbing, difficult gear placements.

What is a Twin Rope in climbing?

Twin Ropes are generally the smallest diameter and lightest climbing ropes. These ropes are fall rated together, not individually. When climbing with Twin Ropes you must put both ropes through every piece of protection in the rock.

Certified Twin Ropes are indicated with two overlapping circles on the rope-end label. 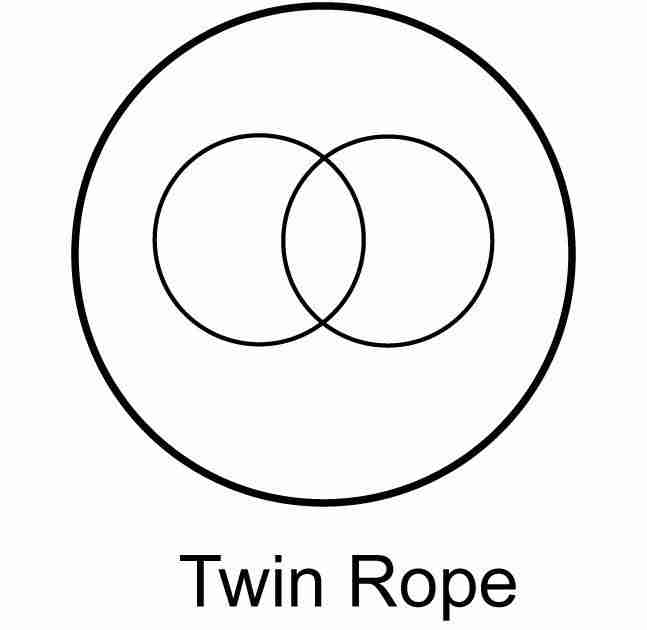 What are Twin Ropes used for?

Twin Ropes can be used for any type of lead climbing but are ideal for mountain routes where weight, rappel length, and rope wear and tear are of greater concern.

Here’s a great video by EpicTV to summarize everything we’ve covered.

So, now you know the difference between Single, Half/Double, and Twin ropes.

What are you going to do with this knowledge?

Which rope set up will you use?

Please note: Some links are affiliate links which help keep this website running. At no extra cost to you, we may earn a commission.

The activities described herein can be dangerous and possess inherent risk. The content provided is not intended as an expert opinion or advice. Seek proper instruction or appropriate medical advice from qualified professionals to learn the necessary skills to participate in any of the activities or regimes described herein. See Disclosure & Disclaimer for more info.

• Backpacking with a dog

• Backpacking with a dog 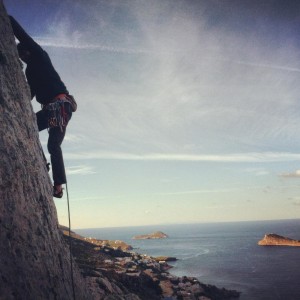 Michael has spent most of his life on the river, in the mountains, or under the sea. He created Crux Range to empower others with valuable-actionable information while fueling his passion for freedom and adventure. Favorite quote, by Jim Rohn, “If you’re not willing to risk the unusual you will have to settle for the ordinary.”

Michael has spent most of his life on the river, in the mountains, or under the sea. He created Crux Range to empower others with valuable-actionable information while fueling his passion for freedom and adventure. Favorite quote, by Jim Rohn, “If you’re not willing to risk the unusual you will have to settle for the ordinary.”

30 years ago Wolfgang Gullich created one of climbing’s greatest training tools; the Campusboard. 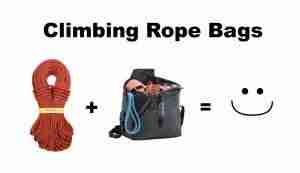 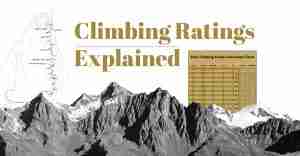 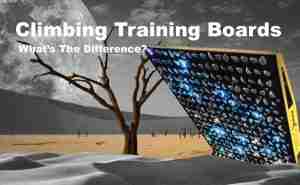 30 years ago Wolfgang Gullich created one of climbing’s greatest training tools; the Campusboard.